Some 350,000 people have attended Friday prayer in Istanbul's iconic mosque after a Turkish court annulled a 1934 Council of State decree that had turned Hagia Sophia into a museum, paving the way for its use again as a mosque.

Friday’s historic prayers in Turkey’s Hagia Sophia Grand Mosque have marked the first acts of worship there in 86 years.

Hundreds of thousands of people took part in the traditional Friday prayers both inside and outside the historic mosque in Istanbul, Turkey’s largest metropolis.

A Turkish court on July 10 annulled a 1934 Council of State decree that had turned Hagia Sophia into a museum, paving the way for its use again as a mosque.

It served as a church for 916 years until the conquest of Istanbul, and a mosque from 1453 to 1934 – nearly half a millennium – and most recently as a museum for 86 years.

Before the Friday prayers, Turkey's President Recep Tayyip Erdogan recited from the Quran inside the reopened mosque, choosing from both the Surah Al Fatihah and the Surah Al Baqarah. 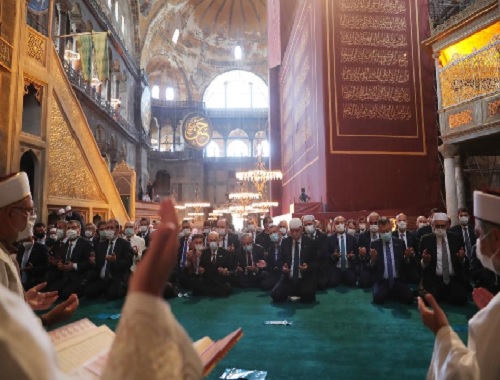 Later, four muezzins recited the adhan, or call to prayer, from the mosque's four minarets and the people started the Friday prayers.

During the visit to the tomb of the Hagia Sophia Mosque's "owner," Erdogan noted that restoring the landmark as a mosque had only been made possible after 86 years with the joint efforts of the People's Alliance – comprising of his governing Justice and Development (AK) Party and Bahceli's MHP – and with the "judiciary now seeing the truth."

Erdogan added that 350,000 people attended the Friday prayer at the Hagia Sophia Mosque.

"As a cultural heritage of all humanity, it [Hagia Sophia mosque] is a place where people of all religions can come and visit," Erdogan said.

He underlined that the monument now returned to its "roots" and would serve all believers.

"Now, this place has returned to its roots, it was a mosque and became a mosque again. Now, I hope it will continue to serve all believers forever as a mosque."

Erdogan also added that specialists from the Culture and Tourism Ministry would conduct restoration efforts both inside the Hagia Sophia and in its surrounding area.

During the service, Ali Erbas, the head of Turkey's Religious Affairs Directorate (Diyanet), read out a special khutbah, or sermon, before the collective prayer, titled "Hagia Sophia: Sign of conquest, our trust in Fatih [Sultan Mehmet]."

Erbas said, “In this blessed time, together, we are witnessing a historical moment in this holy place."

“Hagia Sophia Mosque regains its congregation today, the third day of the blessed Muslim month of Dhul Hijjah, in which the blessed Eid al Adha, or Feast of the Sacrifice, is approaching us.

“The longing that turned into an open wound for the heirs of Fatih has now ended. Eternal praise be upon God the Almighty.

“Today is the day when takbirs [proclamations of God's greatness], prayers, and salawats [salutation upon the prophet of Islam] resonate in the domes of Hagia Sophia, and the adhan – call for prayer – rises from its minarets.

“Today is a day similar to one 70 years ago, when 16 muezzins from the 16 minarets of Sultan Ahmet Mosque, located just opposite Hagia Sophia, joyfully filled the air with the call to prayer, after an 18-year hiatus."

In a Thursday press conference at the iconic marvel,  the governor of Istanbul Ali Yerlikaya said everyone is looking forward to attending the special prayers with great enthusiasm.

Stressing the measures being taken against the coronavirus, he said five different open spaces were reserved for worshippers to prevent overcrowding.

Entrance to the areas reserved for prayer will start at 10 am (800GMT) on Friday, Yerlikaya added.

"Entrance to the prayer areas will be provided after security searches at 11 different checkpoints," he said.

On transportation to the mosque, he said in order to maintain security, some roads and metro lines will be closed before and during the prayer time.

On the Covid-19 outbreak, Yerlikaya said the worshippers who come to Hagia Sophia should bring their own masks and prayer rugs and that he hoped everyone would observe patience and adhere to the social distancing rules to protect against the virus.

Erbas said Mehmet Boynukalin, Ferruh Mustuer and Bunyamin Topcuoglu were appointed as imams of the mosque.

Hagia Sophia is among Turkey’s top tourism destinations for both domestic and foreign visitors.

In 1985, during its time as a museum, Hagia Sophia was added to the UNESCO World Heritage List.

In the new era for Hagia Sophia, Turkey’s Religious Affairs Directorate will oversee religious services at the mosque, while the Culture and Tourism Ministry will supervise restoration and conservation work.

The architectural treasure will also be open to domestic and foreign tourists free of charge.